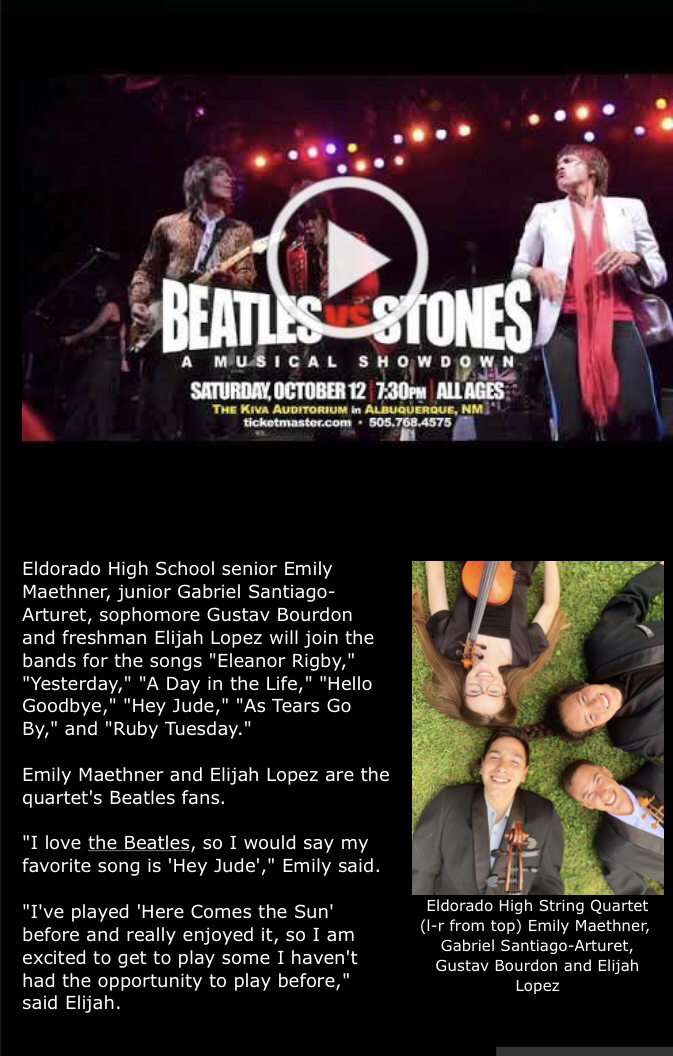 Location:
Kiva Auditorium
401 2nd St. NW
When the touring show Beatles vs. Stones – A Musical Showdown comes to the Kiva Auditorium on Saturday, Oct. 12, the Eldorado High School String Quartet will join the professional musicians on stage to lend some local talent to this homage to the British Invasion.
The show pits Rolling Stones tribute band Satisfaction against rival Brit boys Abbey Road in an all-out musical showdown for rock dominance. The string quartet will perform seven songs with the bands.
Here's the rundown:The show: The two greatest rock 'n' roll bands of all time face off in Beatles vs. Stones - A Musical Showdown. Taking the side of the Fab Four is Abbey Road, one of the nation's top Beatles tribute bands. With brilliant musicianship and authentic costumes and gear, Abbey Road plays beloved songs spanning the Beatles' career. They engage in a "showdown" of the hits with Stones tribute band Satisfaction - The International Rolling Stones Show, who offer a faithful rendition of the music and style of Mick Jagger, Keith Richards and the bad boys of the British Invasion. The production includes multimedia, period costumes, and vintage instruments. It has toured for years, with a critic for the Los Angeles Times at one point declaring: "this is a unique tribute show in decades." The Albuquerque show is part of a 125 city tour of the U.S., Canada, and Australia.
The string quartet: Eldorado High School senior Emily Maethner, junior Gabriel Santiago-Arturet, sophomore Gustav Bourdon and freshman Elijah Lopez will join the bands for the songs "Eleanor Rigby," "Yesterday," "A Day in the Life," "Hello Goodbye," "Hey Jude," "As Tears Go By," and "Ruby Tuesday."
Quartet members belong to prestigious area ensembles, including the Albuquerque Youth Symphony. Members have competed in solo and ensemble festivals, consistently receiving superior honors.
Emily Maethner, 17, has been playing violin for seven years. She has competed at local solo and ensemble festivals, receiving superior ratings on each performance.
“I really enjoy music in general, so being able to play with people in an orchestra on a big scale is really fun to do.”
Emily participates in various volunteer programs and is a member of Eldorado’s National Honor Society, the Spanish National Honor Society, and the Tri M Music Honor Society.
The senior plans to go to the University of New Mexico and study Architecture.
Gabriel Santiago-Arturet, 16, has been playing violin for seven years. He is a member of the Albuquerque Youth Symphony.
“I really love just playing and hitting the last note on a beautiful piece. The way it completes the picture, it is a nice moment of awe.”
Gabriel enjoys playing a variety of music and is in a jazz band with some of his friends.
The junior hopes to continue to play music after graduation, to hopefully teach one day.
Gustav Bourdon, 15, has been playing viola for five years. He is a member of the Albuquerque Youth Symphony. Gustav has competed at local solo and ensemble festivals, receiving superior ratings.
“Playing viola gives me the opportunity to challenge myself and learn a skill.”
Gustav participates as a member of Eldorado’s Cross Country team.
The sophomore plans on attending college upon high school graduation.
Elijah Lopez, 15, has been playing cello for ten years. He is a member of the Albuquerque Youth Symphony. Elijah has competed in the District 7 Solo and Ensemble Festival.
“I like playing with other instruments and getting to know the people who are playing those instruments, but also interacting with the conductors.”
Elijah enjoys playing basketball for the local YMCA.
The freshman plans to continue to play music upon high school graduation.
How the "Beatles" and "Stones" connection was started: The producers of Beatles vs. Stones approached EHS Director of Orchestras Maria Stephanova Mar looking for a quartet who could hold its own with a rock band in front of an audience. The show commonly hires a local quartet to augment the production while on tour.
The details: Two of the greatest bands of all time face off in a high-energy, adrenaline-pumping musical showdown. The Fab Four, represented by tribute band Abbey Road, will engage in a barrage of hits against premier Rolling Stones tribute band Satisfaction. Beatles vs. Stones – A Musical Showdown comes to the Kiva Auditorium on Saturday, Oct. 12 at 7:30 pm. Tickets are $25 - $55, plus ticket fees, and available by phone at (505)768-4575, at the Theatre Box Office or online at www.ticketmaster.comExternal link opens a new window. . The Kiva Auditorium and Box Office are located at 401 2nd Street NW. The Kiva Box Office is open Monday – Friday from 9 a.m. to 4 p.m. The show is appropriate for all ages.

If you’re a student, the Sound Card is the best way to experience the New Mexico Philharmonic. A Sound Card Student Membership unlocks the entire season for just $30. More than 20 different programs and concerts are yours. Unlimited concerts—all season long.

Check out "Wynton's 12 Ways to Practice, From Music to Schoolwork."

Making a violin- from start to finish

Dominique Nicosia makes a violin at the Mirecourt Museum in France
French violin maker Dominique Nicosia is filmed by Baptiste Buob while making an instrument at the Museum of Violin and Bow Making in Mirecourt.
A revealing half-hour insight into the complicated and precise world of the luthier.

Check out this video about how playing an instrument benefits your brain!